How to overcome an infatuation

Where is the Visa Number on a US Visa?

Salary of teachers and nurses. The Chief Executive Officer (CEO) of the Public Sector Reforms, Kusi Boafo has disclosed that the demand for a 20% cost of living allowance by some labour organized groups is equivalent to employing about fifty thousand (50,000) workers in the public sector.

Speaking to Kwaku Dawuro on Movement In The Morning show, Mr. Boafo said that ”if the request by the Trades Union Congress (TUC) is granted, the government may not be able to employ about 50,000 graduates for the next five years.

Therefore, I’m urging the public sector workers to be moderate in their demands”.

According to him, when public sector workers demand salary increments, it’s indirectly requesting tax from the private sector and therefore bears the consequences making it impossible for the private sector employers to increase the salary of their employees. 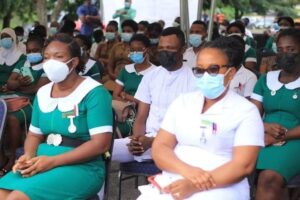 He, however, indicated that the government is not happy about the current state of the sector but is unable to terminate the contracts of some unproductive workers because people will end up politicking and blaming the government for taking their jobs away from them.

Adding that about 10% of public sector workers should be sacked!

Scholarship With Free VISA And Study In Canada

King Promise spoke about his no-awards conundrum and has alleged that some people in the industry have decided to sabotage...

Scholarship With Free VISA And Study In Canada