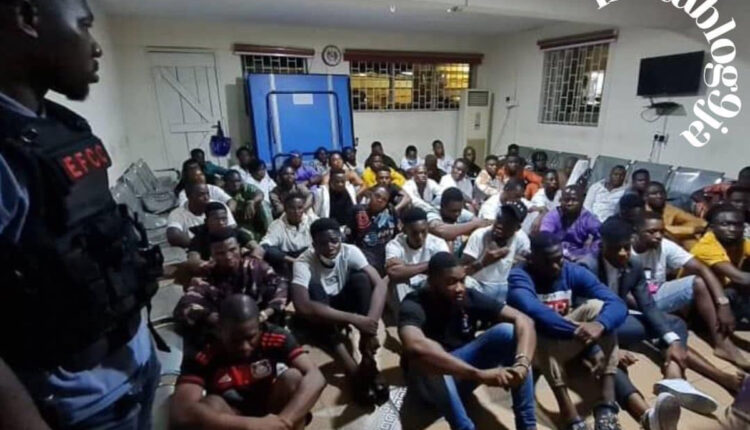 Instablog9ja reports that operatives of the Lagos Command of Economic and Financial Crimes Commission (EFCC) have arrested 60 suspected internet fraudsters (sakawa or yahoo yahoo boys) during an award ceremony at Conference Hotel in Abeokuta, Ogun.

Briefing the press on how they rounded up the young men, spokesperson for EFCC, Mr. Wilson Uwujaren, in a statement on Monday, November 29, said that the suspects were arrested at an event, tagged: “Peer Youths Awards”.

According to him, an investigation revealed that the event was organized to reward high-level internet fraudsters.

“Items recovered from the suspects at the point of arrest include exotic cars, electronic devices, laptop computers and mobile phones.

The suspects will soon be charged to court,” he said.

In other news, a bride who could not wait to get home before showing her newly married hubby what she’s equipped with swung into full gear at their wedding reception.

The young lady tilted her back to her man and ‘grinded’ him like there’s no tomorrow. He equally rose to the occasion and supplied the required adrenaline to supplement their dance routine.

Other guests cheered them on wildly and it was a sight to behold. Watch the video here;