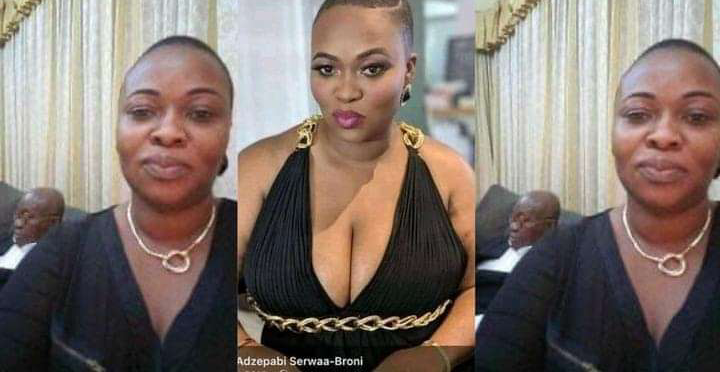 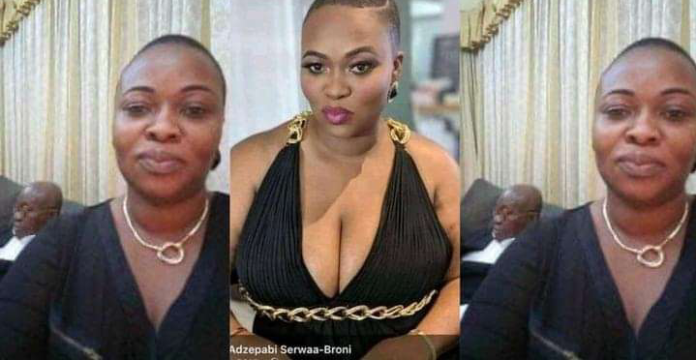 Serwaa Broni, alleged side chic of Nana Addo exp0ses their relationship, reveals his time with him at the hotel, private jet rides & other chilly details [Video]

What is a normal vagina supposed to look like?

Serwaa Broni, alleged side chic of Nana Addo exp0ses their relationship, reveals his time with him at the hotel, private jet rides & other chilly details [Video]

A self-acclaimed side chic of Ghana’s President Nana Akufo-Addo, Serwaa Broni has exposed her clandestine amorous relationship with him and dropped other chilly details.

According to her, the president has been making advances towards her and had even gone a step further to reveal his strong feelings to her when they met in Toronto Canada. She said the President had been pestering her with the aim to meet her desperately.

When they finally met, she could not bring herself into terms with the fact that the President wanted to be in an amorous relationship with her which was the reason for their meeting.

Since he was out of the country, he was not constantly in touch with the president.

However, she added that the President was always eager to meet her anytime she stepped down in Ghana.

Serwaa Broni said in a longish video that the president once chartered a private jet for her from Kumasi to Accra because he wanted her to be close to her so they could have a good time.

The president, according to her, had wanted her overnight with her at Kumasi during a funeral he was invited by him to but she left to attend to a pressing issue in Accra.

During her short time with Nana Akufo-Addo in the hotel, Serwaa Broni said she decided to take a mirror selfie which got the President’s face reflected and captured in the shot.

According to her, she shared the photo on Facebook and she was called by the President and National Security to pull it down since it could have dire political implications.

Serwaa Broni said although she has never voted in Ghana, she has always been in touch with the President and although he [Nana Akufo-Addo] has a beautiful wife, he has never shied away from expressing his love for her.

She maintained that she decided to keep the issues to herself but in the fullness of time, she has decided to drop all the info about her clandestine relationship with the President.

Photos have emerged of Serwaa Broni and Nana Addo in happy moments which give some credence to her claims.

Was Nana Addo in a relationship with her before she met and married the First Lady? Why is he interested in her even after that? How true are her claims? These of some of the questions on the minds of many

According to sources, Serwaa Broni is well known among the NPP functionaries and many understand her relationship with the President.

She even spoke at length about former NPP MP Hopeson Adorye and the role he played in taking GHC20,000 back from her after a robbery was staged.

What is a normal vagina supposed to look like?