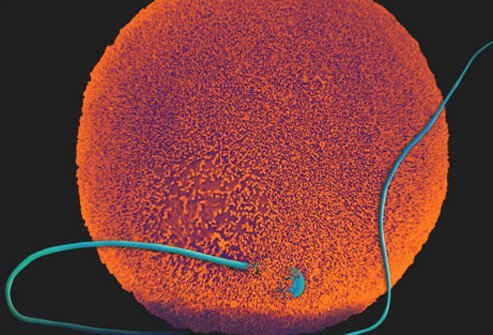 Conception: The Journey from Egg to Embryo

Conception: The Journey from Egg to Embryo

Conception: The Journey from Egg to Embryo.

Each month, one of a woman’s two ovaries releases a mature egg in a process known as ovulation. Ovulation occurs about two weeks after the start of a woman’s last menstrual period.

Moving Into the Fallopian Tube

The released egg travels into the Fallopian tube, where it is fertilized by a single sperm.

When a man ejaculates, 40 to 150 million sperm may be contained in the fluid. The sperm start swimming upstream in the women’s reproductive tract toward the Fallopian tubes. The time it takes for sperm to reach an egg is very variable – some may reach their target in half an hour, while others may take days. Sperm can live for up to 48 to 72 hours. Of the millions of sperm, only a few hundred even come close to the egg.

The process of fertilization takes about 24 hours. Once a sperm has penetrated the egg, the egg surface changes, preventing entry of other sperm. Fertilization completes the genetic makeup of the baby, including whether it will be a girl or boy.

The Cells Start to Divide

A hormone called human chorionic gonadotrophin (HCG) is produced by the cells that will eventually form the placenta. It can be found in the mother’s blood within about a week of conception and is detected in pregnancy tests done on blood or urine.

After implantation in the uterus, some of the cells form the placenta while others form the embryo. The heartbeat begins during the fifth week of gestation. At the eighth week the developing embryo is now called a fetus. The fetus at eight weeks is about ½ inch long and constantly growing.

Conception: The Journey from Egg to Embryo
8,868
Share FacebookTwitterGoogle+ReddItWhatsAppPinterestEmail

Teacher Kwadwo Confirms that he has been sacked

I cannot be blamed for the hardships in Ghana – Akufo-Addo

5 Measures to Improve the Quality of Healthcare in Ghana

How What You Eat Affects Your Sleep-2022

CAN WEIGHT LOSS CAUSE STRETCH MARKS?