Does diabetes and heart disease favor each other? 5 key points to know

7 reasons why cowgirl sex position is the best

Recently, the biggest debate that has eroded the social media space is the implementation of the electronic transaction levy initiative.

According to some NDC members of parliament, the initiative will be accepted if the percentage to be levied is reduced to 1%.

According to the NPP government, all the initiative seeks to achieve is the generation of revenue for the country.

In a recent Twitter post shared by netizens, it can be concluded that most citizens are not in support of the initiative.

According to one disappointed social media users, he is ready to stop using his mobile money account once the electronic transaction levy initiative is implemented. 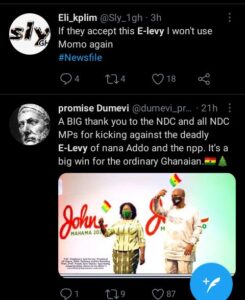 The post “If They Accept This E-levy We Won’t Use Momo Again” – Netizens Boldly Declare Their Stand appeared.

Our Ambition To Retain Power In 2024 Must Not Díe

A guide to SIM cards, the small chips that connect your phone to a cellular network

GOVERNMENT TO RECRUIT NURSES IN NOVEMBER 2022