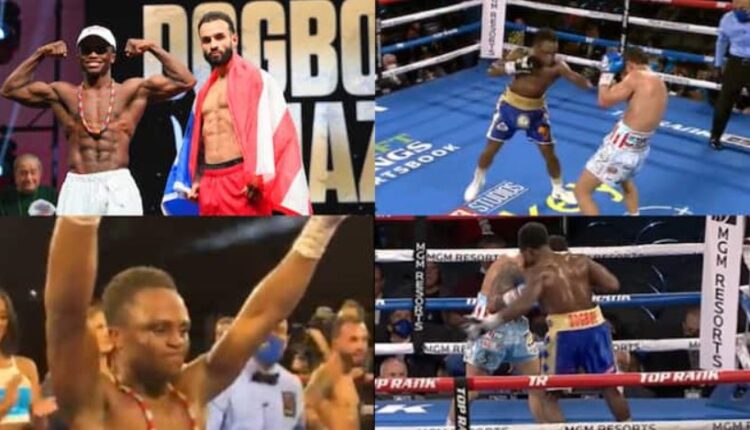 It was a competitive fight all the way with both fighters landing their share of solid shots. Maybe the best shot of the fight came in the third round when Diaz rocked the Ghanaian with a left hook, although he recovered quickly.

By the fourth round, Diaz had some swelling around his eyes but continued to fire combinations and stiff jabs. Dogboe looked to box more and pick his spots to punch, which he did with a strong close to the sixth round when he caught Diaz with a combination along the ropes.

They traded three-punch combinations early in the ninth round and later in the round Dogboe was warned by referee Raul Caiz Jr. for lifting Diaz off the canvas when they were in a clinch.

In the 10th round they fought as though they both believed the outcome was in doubt and tried to close impressively.

Dogboe won his third fight in a row since losing his WBO 122-pound world title to Emanuel Navarrete by unanimous decision in December 2018 and getting stopped by him in the 12th round of an immediate rematch in May 2019.

Diaz lost his second fight in a row. On April 24, he was stopped by Navarrete, now the WBO featherweight titlist, in the 12th round of a title challenge.

Ghanaian and Nigerian celebrities with their twin kids