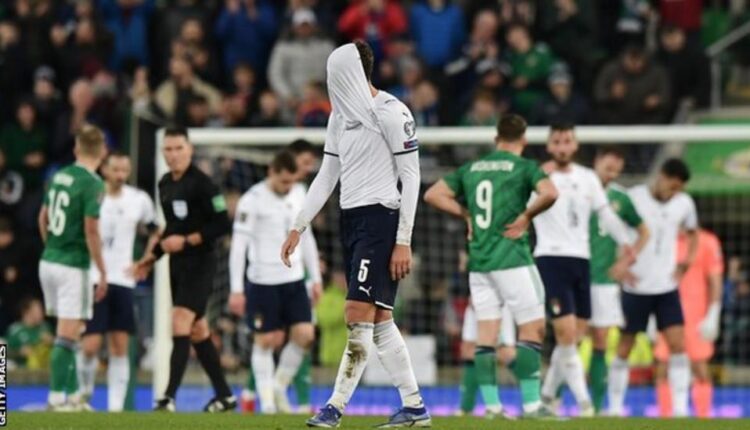 It was one of the biggest shocks of World Cup qualifying. Italy, the European champions, missing out on an automatic place at Qatar 2022 and instead being forced into the play-offs.

The Azzurri went into their final qualifier against Northern Ireland top of Group C on goal difference, but a goalless draw in Belfast combined with Switzerland’s thumping 4-0 win over Bulgaria sent the Swiss straight through to Qatar instead.

The prospect of yet another play-off will bring back painful memories of 2017, when Italy were beaten over two legs by Sweden to miss out on the 2018 World Cup in Russia, a result described as the “apocalypse” by Italian newspaper Gazzetta dello Sport.

For manager Roberto Mancini, though, the prospect of a play-off holds no fear.

“We will make it to the World Cup in March and then maybe we will even win it. I am totally confident,” said the Azzurri boss.

“Despite controlling matches, we’re struggling to score goals at the moment. We needed to score early on tonight. It’s a shame because we should have finished things off sooner in this group.

“We need to rediscover what has set us apart until now and remain completely calm until March.

“We should have won against Bulgaria and had two penalties against Switzerland. These are games that could have finished in our favour. I’m completely confident about the play-offs.”

‘Those phantoms they have had have come back’

Italian football expert James Horncastle told BBC Radio 5 Live: “The international calendar is one of the reasons Italy have struggled. No sooner do they come out of winning the Euros then they are straight back into a World Cup qualifying campaign, and I think it was that hangover they had in September. They drew with Bulgaria at home and then drew 0-0 in Switzerland with Jorginho missing a penalty.

“The same thing happened against Switzerland earlier this week and all of a sudden those phantoms they had have come back. Winning the Euros was them getting over not qualifying for the 2018 World Cup and here they are facing not qualifying for another one.

“Italy had a play-off last time around in 2017 against an opponent many thought they would be able to overcome in Sweden and the tension really got to them on that occasion.

“If you look at some of the players that were missing tonight – Spinazzola, Verratti, Chiellini, Immobile – it’s no excuse but it is one of the things.

“They were undefeated in the group and had they won tonight they could have gone through on goal difference. So it’s not a complete disaster just a matter of fine margins.”

‘I could have been a racist killer’