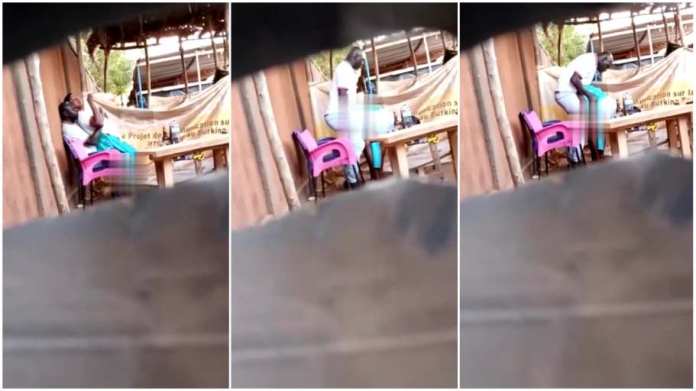 A man whose lust spiraled out of control took it all out on a waitress in broad daylight had had his shenanigans captured on tape.

We have scanty information about how the two decided to throw caution to the wind and have intimacy without privacy but as we guess their urge was stronger than the seeming repercussion.

It was gathered that after the man stormed the eatery joint and was served the meal he ordered for, he decided to take advantage of the quietness of the place to unleash his own agenda.

The man might have been chasing this lady for a while hence she easily gave in to his demands and the product is what has saturated a cross-section of social media.

Owing to site policy, we cannot upload the video here but the photo below can give you a fair idea as to how things went down.

In other trending news on www.Ghbase.com, a schoolgirl has been spotted in a trending video swinging her teacher’s mind into a lustful circus as she shakes her tiny bortos in front of him while other students cheered her on.

The short video which was shared on Instagram by Wisdom Blogg showed the girl in short uniforms going gaga with sensual dance moves that caught the teacher by surprise.

While her performance was in full gear, the male teacher who had a nose mask on sat still as he never rebuked the girl or made any gesture that showed he was enjoying the short drama.

It’s not clear where the video originated from although some netizens insist it occurred in South Africa. As you can imagine, the video has generated a flurry of reactions online.

Different styles in bed is a sin, christians must not do it