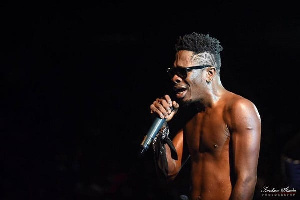 Dancehall king Shatta Wale has reportedly been shot and in critical condition at a hospital.

His road manager, Nana Doe, took to Snapchat to reveal that Wale was ambushed by some unknown gunmen in East Legon today.

According to him, they attacked them in the rain and Wale was lucky to escape with his life.

Doe, who doubles as Wale’s personal assistant, wrote on his snap: “SMH!! They could do this in this rain? SMFH

“If not the fact that he was driving prepared, it would have been too bloody!! F*ck this!! My niqqa too strong to give up!! You strong my g, I dont even know what to even say!! The typing make difficult.

“Thanks to all those calling to check up, the king is still at the emergency ward receiving treatment.

“The gunmen are still on the run. Thanks to Ghana Police,”

Meanwhile, in a new twist, other names in Shatta Wale’s camp are claiming that the news of his accident is not accurate.

Whatever games they are playing in the SM camp, they should sort it out and let us know what story they want out there.

Transport fares to go up before December if… – GPRTU