President Nana Addo Dankwa Akufo-Addo delivered the State of the Nation Address (SONA) on Tuesday, March 9, 2021, at the Parliament House.

In his speech, he made claims about the government’s contribution to education, food production, and funding for anti-corruption institutions.

Fact-Check Ghana has verified some of the claims and presents the verdicts and explanation below.

Claim 1: “That is why, within two years of being in office, we more than doubled funding for accountability institutions of state, like CHRAJ.”

Explanation: To start with, this is not the first time President Akufo Addo has made this claim. At the 2020 SONA, the President made a similar claim about increasing budgetary allocations to accountability institutions, however without the assertion that his government doubled the allocations.

“Government has increased budgetary allocations to all the accountability institutions of  State, including the  Parliament of  Ghana,  the  Judiciary, CHRAJ, EOCO, the Office of the Attorney-General and Ministry of Justice, the Auditor General, the Office of the Special Prosecutor and the Ghana Police  Service with annual increases between  25%  and  34%  between 2017 and 2019,” Akufo Addo said at the 2020 SONA.

Fact-Check Ghana verified the claim last year (2020). In verifying the claim, the team filed an official Right to Information request to the Commission on Human Rights and Administrative Justice (CHRAJ) to seek information on budgetary allocations for the commission and actual releases from 2013 to 2019. The year 2020 was not included because the information requested required the actuals released to the institution, which may not have been available for the year 2020 as at the time the request was made.

Following the request and in compliance with the RTI law, CHRAJ presented to Fact-Check Ghana data on its budgetary allocations and the actuals released to the institution for the years 2013 to 2019.

Giving the change of the value of money over a period of time, Fact-Check Ghana used the Oanda exchange rate of 31st December for each of the years to arrive at the dollar equivalent of the actuals in the various years.

The table below presents the figures received from CHRAJ. 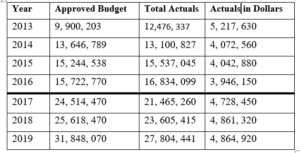 (The dollar column was created by  Fact-check Ghana and not part of the data received from CHRAJ.)

Claim 2: There has been an increase in the quantity of maize production by one hundred and ten per cent (110%)

Explanation: During the ministerial vetting, on February 19, 2021, Dr Owusu Afriyie Akoto, Minister of Food and Agriculture, presented data on the quantity of maize production the government recorded during its first term (2017-2020) and compared it with the quantity recorded in 2016, the year before the current government came to into office.

“Before we came into office in 2017, the highest amount of production of maize in this country was 1.8 million metric tonnes. And I am talking about 2016, which was the last year before we took over. Since then, Honourable Chairman, Maize production in 2017 was 2 million; 2018, 2.3 million; 2019, 2.9 million and 2020 we projected 3.1 million but for the massive drought in the south of the country in the main producing season and the minor season we could have reached that level. But because of the drought in the two major growing seasons in the south, we were able to do 1.9 million,” Dr Afriyie Akoto said.

Thus, according to the Agric Minister below is the data on the quantity of maize production from 2016 to 2020 (measured in Metric Tonnes)

Source: Minister of Food and Agriculture

None of the quantity of maize recorded from 2016 and 2019 will give 110% increment when compared with the 2020 recorded quantity.

Whilst stating measures taken by his government to cushion citizens in the early stages of the novel coronavirus in Ghana, President Akufo-Addo said all households were provided access to free water by the government.

Claim 3: “……..Provision of free water for all households, provision of electricity for lifeline consumers and a fifty per cent (50%) discount for all other customers”.

Explanation: This is not the first time this claim has been made by the President.  During his 14th Address to the Nation on COVID-19 in July 2020 and the launch of the NPP’s 2020 Manifesto, President Akufo-Addo made similar claims which were verified by Fact-Check Ghana and declared as misleading. This is because not all Ghanaians have access to potable drinking water or water supply through the main channels, through which the free water supply was provided.

The current Ghana Living Standard Survey (GLSS 7)indicates that the provision of water from government-controlled sources across the country is 64 per cent.

The remaining 36% of households, according to GLSS 7, rely on water supply from non-governmental organisations (NGOs), wells, natural sources (rivers, streams, dugouts, etc.), tanker supply/vendor-provided, sachet, and bottled water as their sources of water. Some of these sources come with costs that are not catered for by the government’s relief packages.

Also, following the government’s announcement of the provision of free water, the GWCL in a news report said its customers who were already disconnected would not enjoy the free water package from the government.

In its Multiple Dimensional Poverty report published in June 2020, the Ghana Statistical Service indicated that its national censored headcount ratios in 2017 identify about 17.8 per cent of Ghanaians who do not have access to water.

Similarly, the Ghana Multiple Indicator Cluster Survey 2017/18 ( MICS 6) report published by the Ghana Statistical Service and other agencies indicated that 30.8 per cent of  Twelve thousand, eight hundred and eighty-six ( 12,886 ) persons interviewed across Ghana have their own source of water with improved conditions, whilst 14 per cent of the same population do have access to improved water sources.

This, therefore, shows that the President’s claim of providing free water for “all households” is misleading.

Claim 4: “We have, for the first time in a long while, become a net exporter of food, as opposed to the days of importation of tomatoes and plantain. Indeed, in 2019, we exported some one hundred and forty thousand metric tons (140,000 MT) to our neighbours.”

Explanation: On March 10, 2020, Dr Owusu Afriyie Akoto, the Minister of Food and Agriculture, making a presentation at the Meet the Press series provided a different figure. He said the government in 2019 rather exported 133,145 metric tonnes (MT) of food items worth GH¢188.36 million.

Here are the requirements for covid-19 vaccination [Audio]

According to the Agric Minister, the 133,145 MT was made up of 17 food items including banana, cabbage, green pepper, citrus/orange, cowpea, gari, ginger, groundnuts, palm fruits, palm oil, and pawpaw. Others were plantain, rice, sorghum, soya beans, white maize, yam, and yellow maize.

The minister’s claim of 133,145 MT of exported food items which was reported by several media outletsincluding the Daily Graphic contradicts the President’s figure of 140,000 MT.

The President also made some claims about the results of the students who took the 2020 West Africa Senior School Certificate Examination (WASSCE). The students were the first batch of beneficiaries of the government’s flagship Free Senior High School programme.

Claim 5: “This was an impressive WASSCE performance, with over sixty per cent (60%) of candidates scoring between A1 and C6 in their best six subjects, including English and Mathematics, which qualifies them for tertiary education.”

Explanation: The West African Examinations Council (WAEC), the body in charge of conducting the exams and awarding certificates at the Senior High School level, released the 2020 WASSCE results in November that year. The Council presented the performance of the candidates regarding the four core subjects in the Table below on their website.