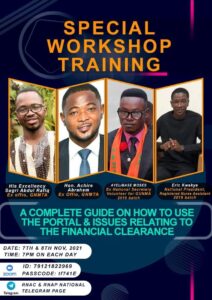 ‘The financial clearance is for those passed NMC Licensing exams in 2019’-Sugri Abdul Rafiq to 2019 batch of nurses and midwives .

The ministry of finance has released the financial clearance to pave way for the recruitment on fresh nurses and midwives in the healthcare system.

However, many are in a state of confusion as to whether the financial clearance covers the whole 2019 batch or those who passed their license exams in 2019.

Read his statement below

Those who will pay money for change of region will be arrested. The Portal is free, recruitment is free. No one should pay money.

MOH recruitment portal for nurses closes today; what next??

Also, the MoH will no longer use the bottom-up approach as was earlier communicated but the same system that was used to engage the 2017 and 2018 groups.

With the 2018 group, the remaining slots could not cover all NAC/NAP referred groups. so they have to request a supplementary clearance for them.

In a nutshell, we can only begin to talk about referred groups when their colleagues who passed in 2019 are through.
MoH will make arrangements for the 2020 group of which the referral group is part.
But for now, this clearance is for those who wrote their N&MC exams and passed in 2019.

A Nurse At Tema General Hospital Told Me To Sell My…