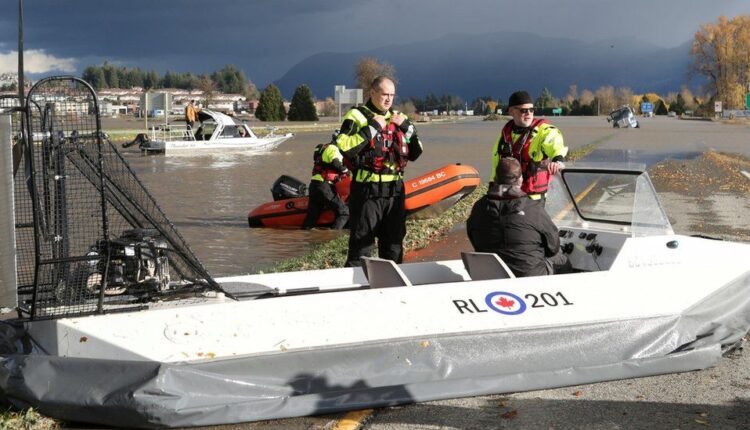 Vancouver storm: A state of emergency has been declared in British Columbia

A state of emergency has been declared in the Canadian western province of British Columbia after a major storm cut road and rail links in the region.

The Canadian Armed Forces are being deployed to help thousands of stranded residents who have been trapped since the storm hit overnight on Sunday.

One woman was killed in a landslide, and two people are missing.

Thousands remain evacuated after an “atmospheric river” – a long strip of moisture in the air that transports water from tropical areas towards the poles – dumped the region’s monthly rainfall average in 24 hours.

Officials in the region have attributed the natural disaster to the effects of climate change.

The impact of climate change on the frequency of storms is still unclear, but we know that increased sea surface temperatures warm the air above and make more energy available to drive hurricanes, cyclones and typhoons. As a result, they are likely to be more intense with more extreme rainfall.

The world has already warmed by about 1.2C since the industrial era began and temperatures will keep rising unless governments around the world make steep cuts to emissions.

What have officials said?

He said that travel restrictions will keep people off flooded roads, and ensure that essential goods will “reach the communities that need them”.

“There’s not a person that hasn’t been effected or will not be effected by the events of this past weekend,” he said, adding: “These events are increasing in frequency due to human caused climate change.”

Mr Horgan said British Columbia must “bring the seven billion other souls that live on this planet to understand that we need to act now… to protect us from these types of events that will happen in the future”.

How is this linked to climate change?

University of British Columbia atmospheric scientist Rachel White told the BBC that the massive devastation caused by this storm can likely be attributed to a combination of human-caused factors.

“As we warm up the climate, heavy rainfall events such as these are going to get more intense,” she said.

Logging and wildfires have also removed old-growth trees with deep roots, leading to a higher risk of landslides when it rains. Human development in flood plains, and the increase of non-absorbent asphalt also increases risks of flooding, Prof White said.

The extreme weather in Canada comes days after world leaders met for the COP26 climate conference in Glasgow.

The same region, British Columbia, suffered a record high heat wave in the summer that killed more than 500 people as well as wildfires, including one that destroyed the village of Lytton.

What is the current situation in British Columbia?

The rains and winds had largely finished by Tuesday afternoon, but several communities remain stranded. More rain is in the forecast for later in the week, and officials have warned that the death toll is likely to rise.

The town of Tulameen has about 400 people trapped there, according to Reuters news agency.

The local school is currently housing about 700 people, and the church is hosting about 250 people and also feeding about 400 people per day.

Around town, “many [are] sleeping in their cars at night”, he added.

He said that power was restored on Tuesday, which lifted spirits, but food supplies are running low despite an emergency air drop.

“The community emergency services have organised some airlifted supplies that have allowed us to keep feeding people,” he said. “But the situation with food will become worse if the roads do not open soon.”

Premier Horgan has called on residents to stay at home, and to not hoard items. “What you need your neighbours need as well,” he said.

Residents of some neighbourhoods in the city of Abbotsford were told on Tuesday to leave immediately as rising water levels posed “a significant risk to life”.

In a press conference on Wednesday, Mayor Henry Braun said water levels in the nearby Fraser River were dropping but warned: “We’re not out of this yet.

“If we have another weather event like we just went through, we’re in deep doo-doo,” he said.

Rescue operations are still under way in the area, and aerial assessments of the damage are being conducted.

The Royal Canadian Mounted Police (RCMP) confirmed on Tuesday that one woman was killed in a highway landslide near Lillooet, about 250km from Vancouver.

Motorist Kathie Rennie told CBC News she saw the landslide come down on traffic that was already at a standstill.

“I just turned around, and I’m just watching the whole side of the mountain coming down and taking out these cars… everything just being swept away. Just complete panic,” she said.

Ethiopia’s Tigray conflict: Why the rest of the world is worried